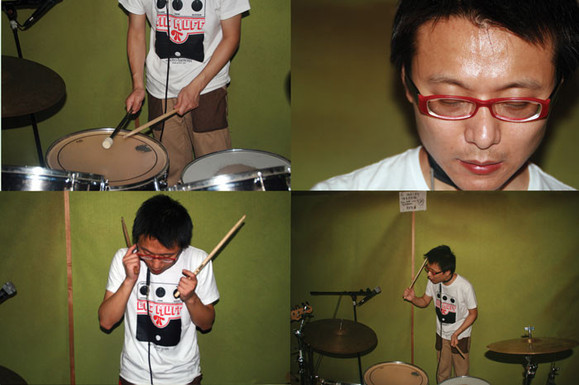 You should get in through the yard if you can find it ring the bell: 0005

Project Gemini and Altes Finanzamt are proud to anounce a collaboration with the basque artist Nadia Barkate.

After spending years drawing non-stop, experimenting with several formats and keeping her base in Bilbao, her curiosity and interests made her end up in Beijing, researching about local bands that took western model of punk movement as a reference to feed their own needs and worries against their social and political situation.

This was just the beginning of an ongoing project that give testimony of one of many examples of what we could call «subculture», in this case from another non-western point of view, quite far away in time and space from the original context.
When Nadia arrived to Beijing, she realized that the club D22, that was promoting and giving visibility to many local punk bands during four successful years, didn’t exist anymore, since the owners had closed it and opened another space called XP, devoted mostly to noise music. This unexpected situation brought her to focuse more in the bands life and she started visiting them in their rehearsals and concerts and recording them. This aim of portraiting a scene turned to a portrate of a more intimate sphere, where the bands where composing and sharing their visions and thinkins about one of these many «subcultures» called noise.

But, is that really a right term, since these reactionary movements have been always bolted by the big market or cultural industry and stay available for use and consumption? It is nowadays so easy to absorb the patterns that surround a movement, even an ideology and make them ours the same way you chose the eggs, oignons and potatoes in the supermarket cook an omelette at home…

Paralely to the exhibition there will be a programm of several works made by other artists, which Barkate selected based on the influence of these artists in her work. Among others we will have the works of: Inazio Escudero (Bilbao), Jeleton (Bilbao/Murcia), Iñaki Garmendia (Ordizia), Dan Graham, Keneth Anger and more…